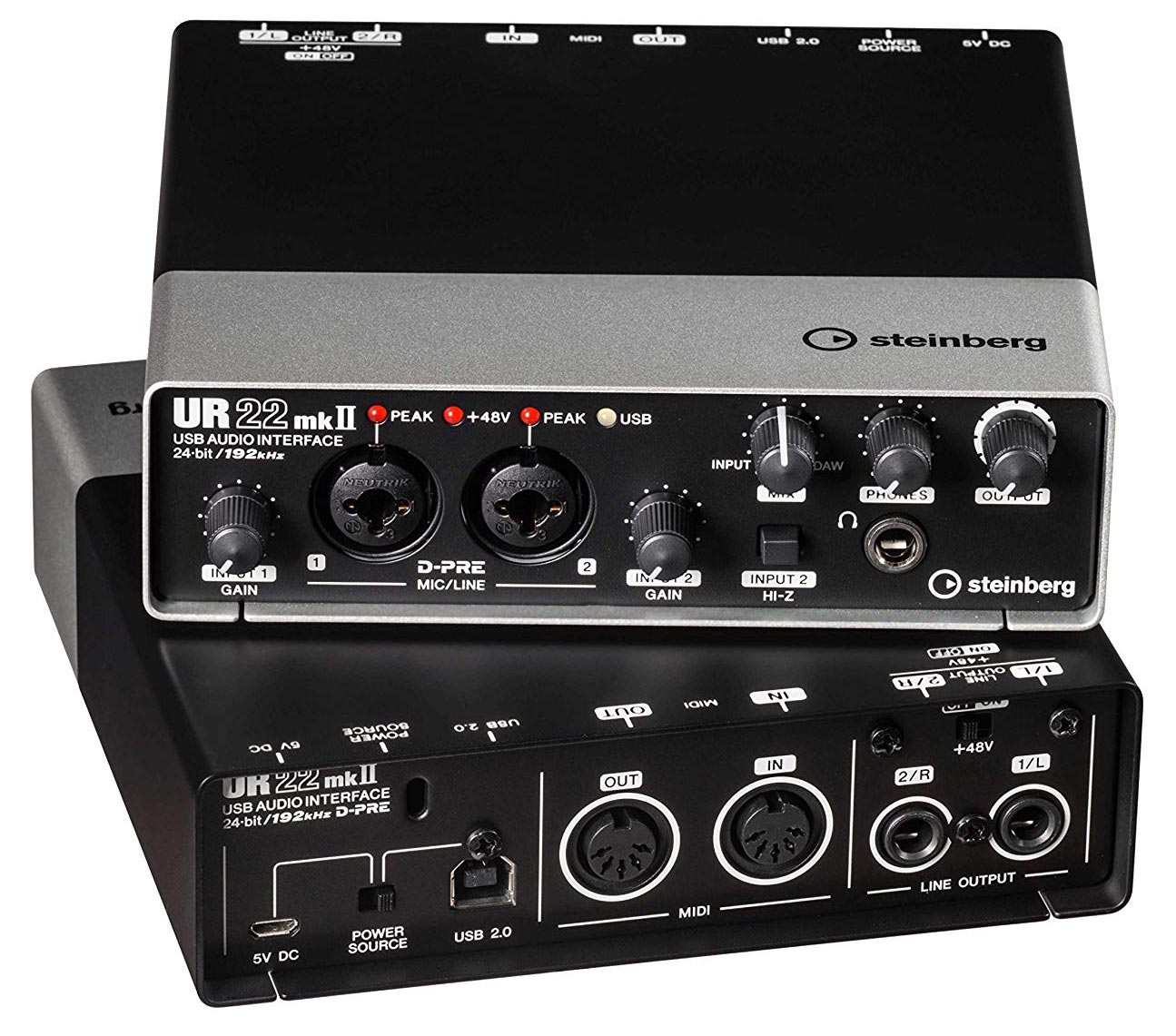 Record and compose music in studio quality on your laptop, iPad or even iPhone with the UR22mkII. With outstanding audio and build quality for its price class, the UR22mkII combines choice components with advanced connectivity and flexible I/O options to offer a full-on mobile production platform.

Top of the range converters provide a maximum sampling rate of 192 kHz and a resolution of 24 bits, delivering pristine audio quality.

Yamaha’s highly-acclaimed D-PRE preamps deliver a truly transparent and beautifully detailed sound that is unrivaled in this product class.

Built to the most exacting standards by Yamaha’s experienced engineers, the UR22mkII is rugged enough to withstand all the rigors of the road.

The UR22mkII features latency-free hardware monitoring and an intuitive Mix knob that allows you to blend between the direct signal and the output of your host.

UR22mkII offers connectivity with Apple’s iPad and iPhone. When paired with Steinberg’s iPad-based Cubasis or other iOS audio apps, the UR22mkII offers a portable and effortlessly intuitive production experience.
MIDI input and output

For utmost flexibility, the UR22mkII is equipped with a MIDI I/O port — connect your favorite synth, a drum trigger module or any other MIDI device!
Loopback function

UR22mkII offers an easy way to streaming performances live to the internet, with incoming audio signals merged to the playback signal from Cubase or other DAWs inside the computer.
Power source selector

UR22mkII provides a 5 V DC port to supply power when connected to an iPad or iPhone. A standard USB power adapter or an external USB battery can be plugged in to guarantee power stability.
Cubase AI included

The world is yours

Together with the included Cubase AI and Cubasis LE software, the UR22mkII audio and MIDI interface is a fully-fledged mobile recording studio. Offering easy and stable connection to PC or Mac computers, the MKII version now adds pro-level recording for iPad and iPhone with the CC Mode and external power input. The UR22mkII offers total mobility, ultra-solid build quality and incredible sound characteristics for its price class, covering all aspects of recording and production in small studio environments as well as mobile production situations.

Integration you can rely on

When engineering the advanced driver architecture for the UR22mkII, our veteran team of audio and driver software developers created an I/O implementation that combines flexibility with stability. And because the drivers support the ASIO, Core Audio and WDM standards, owners of the UR22mkII are free to connect to all DAW applications available on the market today that support any of these widely accepted standards. Via the CC Mode, the UR22mkII also connects easily to your iOS device, enabling a wide range of iOS audio apps to be used with it.

The included Cubase AI is a streamlined version of Steinberg’s world-famous Cubase production environment compatible with Windows and OS X. iPad owners can download Cubasis LE from the App Store for an exciting range of recording and mixing features optimized for touchscreen operation. Because Cubase can open Cubasis LE projects, you can capture musical ideas in Cubasis and transfer them to Cubase for further development, right up to full-on album productions. Quickly capture a melody when inspiration strikes on your iPad, sketch out a song on your PC laptop or MacBook and then transfer your project to a computer running Cubase in a full-blown studio to develop your musical creativity into a complete production, ready for mastering.

The UR22mkII turns your iOS device into a full-on professional music production platform. Connect to your iPad or iPhone with CC Mode using a compatible Apple camera adapter*. The power input socket supplies your UR22mkII with the electrical voltage needed to run professional equipment such as condenser microphones requiring +48 V phantom power by letting you plug in a USB power adapter or a USB battery pack. And with the included Cubasis LE version for iPad, you can start recording and mixing straight away, with the option to upgrade to the full Cubasis version via in-app purchase.

With UR22mkII, you’re ready for a huge range of recording and production scenarios, even when you’re on the move. Record vocals, guitars and other audio equipment with up to two audio channels in pristine 24/192 quality while simultaneously recording MIDI signals. And you won’t have to carry it everywhere on a silk cushion; its sturdy construction and steel casing means the UR22mkII can withstand the rough and tumble of mobile music production. On tour, at home, on stage, or at your rehearsal space: take your UR22mkII with you wherever you need ultra-reliable recording and first-rate sound.

With a flexible range of inputs and outputs, outstanding component quality, pristine sound and a functional depth that belies its compact size, the UR22mkII audio and MIDI interface is designed and built for mobile musicians, producers and DJs that want high performance at any place and at a low price.

The UR22mkII is designed to give you completely dependable performance and a sound quality that can only be described as outstanding for a bus-powered USB interface. And these qualities make it an ideal mobile solution for recording gigs, choirs, concerts or field recordings. With the D-PRE mic preamp, the UR22mkII is equipped to offer a sumptuously detailed sound far beyond what is normally expected of compact interfaces in this price class. And despite its modest size it features switchable phantom power and thus allows you to connect a wide variety of microphones — up to the most expensive condenser mics. All AD/DA conversion is accomplished using choice components that deliver a transparent, detailed sound that does full justice to the original source.

The power to perform

The UR22mkII is designed for touring bands, gigging guitarists and mobile DJs. This compact interface fits snugly into your bag or case yet thanks to its steel casing, it’s virtually indestructible.

The UR22mkII offers the same performance hallmarks of as its bigger siblings, the UR824 and the UR28M, such as premium-quality D-PRE preamps, switchable phantom power, a Hi-Z input for guitar and bass recording as well as 24/192 sound quality. Take it to your rehearsal space or your next gig or show — wherever you are, the UR22mkII provides breathtaking audio quality and reliability.

The UR22mkII offers the same sonic precision, clarity of tone and flawless dynamics as the other members of the UR family. Hooking up the UR22mkII to a pair of high-quality headphones will let you listen to your music collection with a new sense of perspective. This is thanks to the incredible sonic fidelity offered by 24-bit resolution and a sample rate of up to 192kHz. Each component of the AD and DA conversion stages has been selected to offer astounding quality; simply hook up your high-quality speakers or headphones to the appropriate output on the UR22mkII to lend your music collection a new lease of life.

The best for beats

Producers of electronic or beat-based music will find their ideal mobile interface in the form of the UR22mkII. Rock-solid drivers allow you to run VSTis at very low latencies, while the onboard MIDI I/O lets you connect synths, vintage drum machines, MIDI controllers or any other MIDI gear. Plug in a mic or electric guitar to record vocals or guitar parts, all in perfect sync with MIDI data from your project, and recorded with no latency and with the convenience of the Mix monitoring control on the front panel. And because of the outstanding sound quality of components like the amazing D-PRE preamp and the AD/DA converters, any audio you record is at studio quality, meaning you won’t have to go to a studio to re-record it later.

In the club, on the stage

Because it’s been designed to offer so much versatility, the UR22mkII is a perfect companion for live shows and gigs for DJs, guitarists, bands, drummers and just about any other kind of live performer.

One of the most important features here is the monitoring architecture: independent headphone and output controls mean you have all your audio channels under full control. This means that, say, bands sending backing tracks to the FOH mixer have an independent headphone output for the band member operating the laptop. Guitarists needing a reliable interface for live shows can plug directly into the Hi-Z input and route the audio to a virtual amp such as the VST Amp Rack in Cubase. You can even start and stop playbacks or record loop-based tracks on the fly by connecting a MIDI footswitch to begin a hands-free recording session. And thanks to its steel casing, the UR22mkII can take the little knocks and scratches that are bound to happen when you take your equipment onstage.